skip to main | skip to sidebar

The team was faced with a dilemma; there was no

accommodation between Carlisle and Edinburgh just 98 long miles of A7. Nevertheless, there was a plan. The team would attempt to cycle the 98 miles in a single day. The plan was full of risk; this would be their longest day so far and would test to the limit, the bike, the physical endurance and the mental resolve of the team. This was going to hurt; this would be the end2end longest day. At 2300 hrs an exhausted but elated team turned into Redford Barracks, Edinburgh. They had done it! 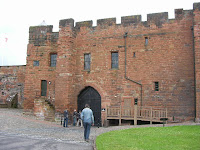 Thank goodness for wives. At 0750 hrs Joanne phoned Jonathan, fortunately waking him from a heavy alcohol assisted sleep. By the sound of the snoring in the cadet barrack block, the team had enjoyed their night out in Carlisle. Hangovers or not we had to be up. Jonathan delivered his normal dawn chorus of, ‘wakey - wakey – rise and shine, those miles aren’t going to cycle themselves!’ Cups of tea all around and goodbyes to Major Paul Chandler and staff. A small crowd had gathered to watch the spectacle of 4 hung-over lads co-ordinate their efforts on a monster bike. As the castle became a distant image our minds switched to the challenge of the huge distance ahead. Once again time would be our nemesis. Jonathan reminded the team not to think of the overall task ‘How do you eat a whole elephant?’ ...’bite by bite.’ The route was broken into bite size portions – first target; the Scottish border.

At 1110 hrs we crossed the border. Alistair’s knee was once again injured so he assumed the post as support 2 in the vehicle. Photos were taken and after some ‘faffing about’ we push on again. Ironically, the greater the distance ahead the more the team has a tendency to ‘avoid getting on the bike’ – time was our continual enemy. Tick - tock... with no breakfast in us, it was nearly time for lunch.

The support lads shot forward to Langholm and found a small village cafe that was prepared to sell us as much greasy ‘lard’ on a plate. The time was 1220 hrs. Locals’ heads 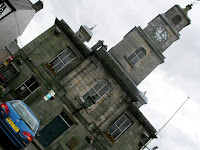 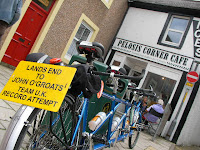 entered langholm, we amused ourselves thinking we could cycle through some villages with the front of the bike sticking out one side and the back still to enter on the other. We commented on the lack of quad-tandem bike racks in Scotland. We must write to Mr Salmon and express our displeasure! Breakfast was inhaled although Jonathan’s searches for a loo found him in a private adjoining flat. Opps. Alistair’s ‘eccentric requests’ attracted some surprised looks. ‘Excuse me could I have a cup of hot water and would you mind heating up this heat pad in your microwave. Just place it in a bowl of hot water for approx 2-3 mins...thank you?’ Tick tock...time was on our

backs again. The scale of the task remained huge 73 miles to do. Incidentally, a newpaper picture of George If like public toilets Micheal) was liken with Jonathan...(what do you think?). Now everyone in the team needed the loo – things were getting more desperate, only one thing to do; we all stormed the local hotel – walking swiftly past the reception and before anyone could say, ‘hey you lot’...we were secure in the gents! Mission accomplished. Outside Tony and Ray met a new pall – George was a friendly fella who was fascinated by the bike. Tick – tock...we pushed on. 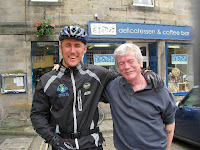 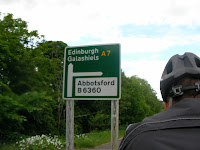 The afternoon sun was glorious. The A7 corridor (Tourist route to Edinburgh) was beautiful. If anyone ever decides to drive from Carlisle to Edinburgh – A7 is a fabulous route. Shella was on top form; our maintenance on her last night was just what she needed. Gears whirred in beautiful efficiency. We understand this bike totally now. Gear changes are smooth and effortless. Everything is co-ordinated by words of command from the bike commander ‘Gear up – gear down – coast, freewheel, prepare to stop’ we have assumed another language...and Sheila likes it. 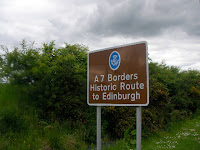 She is happy with her boys and loves to be pampered. Some hills we will walk up, not because we consider we cannot physically do it but because we do not want to place too much pressure on the gears and chains. Every possible risk reduction with this bike is taken; without this bike we have no UK Record! 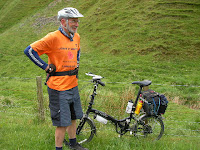 The hills were long although the roads good. At 1420 hrs we met Mr Eddie Sedgemore, a 65 year old from Bristol. What a top fella. He was cycling Lands End to John O’Groats for The Royal British Legion. This was his 3rd end2end...and he was a UK record holder himself for end2ending a scooter in 2001 taking him 20 days and 5.5 hours! This guy was another Alex Baxter (Penny Farthing) chap in Southport. These guys are a total inspiration and illustrate how mind over matter is everything. His bike was state of the art, he travels light with no more than a shopping basket of 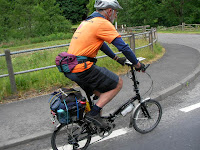 stuff behind him. Behind his silver grey beard and healthy weathered looks hid a man of immense steely determination. In a modern world were self pity and state assistance is common place here was a man who found solutions from within. The human body is an incredible machine but the most important component is the mind and ones mental approach to life. ‘Just bloody well do it!’ With photographs exchanged and handshakes concluded we watched Eddie accelerate off from our lay by. His orange top became a distant dot in the distance. We wouldn’t see Eddie again. 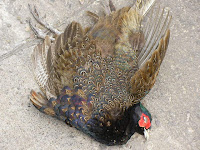 Now at this point it must be mentioned that

we were conducting a road kill competition. Jonathan saw a rather good looking peasant, and knowing how much it would impress Edward and Bertie back home we had to stop to photograph him. Some of the day’s competition entrants are shown here:

1540 hrs and we just reached the day’s half way point - Hawick! Alistair darted off and got some isotonic drink (powder) for us...wow it made such a difference. Odometer reading = 598 miles so far.

The climb out of Hawick was ‘cheeky’ we climbed and climbed and climbed all the way to the top with some hill antenna. The late afternoon sun was gorgeous although still chilly in the wind. Now for the descent or as we say ‘time for some MILES FOR FREE’ Jonathan hates (with a passion) down hills. His experience with the Mendip exploding front tireS has left him emotionally scarred. Down hills must now be accomplished at a girly rate with the reassuring sound of ‘Mr Rear Wheel Disc Brake’. Another blow out is unlikely but you try telling Jonathan that.

Galashields was passed in blur...some cheeky climbs but soon was a town some distance behind. The bike and team were working so well, many descents and gears to die for! The road surface was excellent. We have also realised that the tyre pressure makes a HUGE difference to our progress. Currently we have 70 PSI on the front and 90 PSI on the rear – wow we motor. With progress like this we would be in Edinburgh before you could say ‘och I the noooo’ 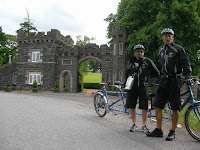 ‘Pull in, pull in’ Jonathan looked anxiously at his map. In our team excitement of making so 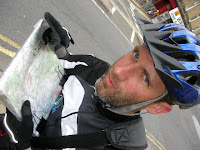 much progress we had taken a wrong turn and sped past the turning form the A7. We were 8 miles along the A72 – heading Glasgow!! Two police ladies in their Police Volvo pulled up and gave some advice. Our corrective route now took us over the top of a hill – this was Jonathan’s first navigation error and we were now being punished for it. The climb and descent allowed us to see some magnificent houses. A lady pulled in and said I keep passing you all afternoon, Jonathan responded ‘You’re not one if those quadracycle stalkers are you?’ She shook her head and drove on...

Fountainhall lay-by provided the team with a rest. There we met Dougie Johnston (a free lance photographer) who was keen to get a picture or two of the bike and team.

He ended up watching and photographing Alistair playing his didgeridoo on a 4 seater quadracycle...how random is that! Our pictures may end up on the BBC news website. Fame at last. 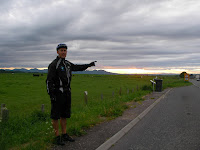 The final push and descent into Edinburgh was tough. We had been cycling for 13 hours and we were knackered. The sun set over the Edinburgh hills as we dropped into the plains of the Forth 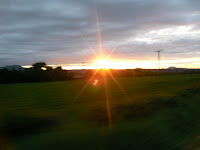 Estuary was awe-inspiring. Edinburgh was very close but we still had some pain to go...dig in fellas. Mark fitted his helmet cam and with a mouth full of some foul tasting energy gel we pushed into Edinburgh. Finding the barracks was naughty...hill after hill. It was 2240 hrs and we were concerned that we could make a mistake as we were all so tired – it was now we were at most risk.

The sight of Redford Barracks, home to 3rd Bn the Rifles, was a sight to be remembered. Pictures outside the main gate. The guard commander was given a seat on the quad as we were shown to our block. Home, shower and then out for a delicious meal in an Italian Restaurant.
Today was an incredible day but not for the reasons you may consider. The achievement was admirable but today we met Eddie, the 65 year old who could teach the world a lesson or two in life. The world would be a better place if people adopted the Eddie Sedgemore approach to life...head down, travel light and just bloody do it! 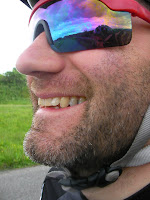 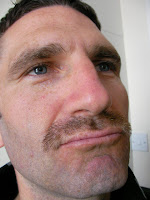 So, who ordered pizza with extra topping?
Posted by Team_end2end08 at 09:52

Team_end2end08
Southport, Merseyside, United Kingdom
In February 2007 3 sons suddenly lost their dad (Gerard Cunningham aged 62) to cancer. Determined to support their local Southport Hospice they will make the first ever attempt to cycle over 1000 miles Land's End to John O’Groats on a quadracycle. Their aim is to raise desperately needed funds for both Queenscourt Hospice Southport and the British Limbless Ex Servicemen Association (BLESMA). En route the lads will be visiting numerous local schools to promote fitness, cycling proficiency and life inspiration. THIS IS A UK FIRST.